I Can’t Hear You: But I’m Still Listening 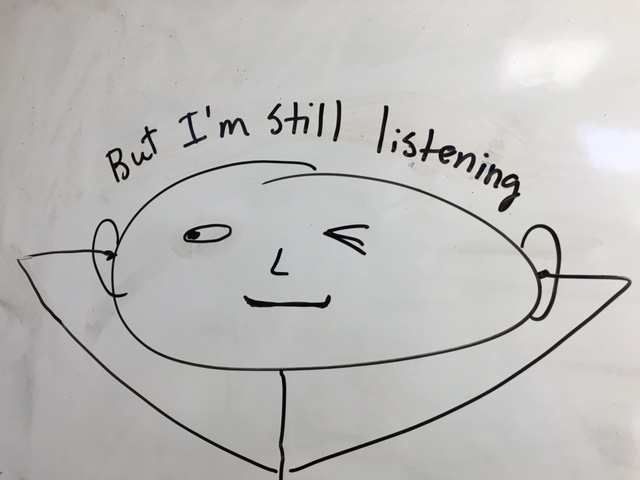 Covering our ears is a universal human response for blocking out unwanted noise. When we’re children, we literally stick our fingers in our ears, most especially when being told not to do what we’re doing. Yelling “I can’t hear you!” at the same time is an especially endearing trait in other people’s children. 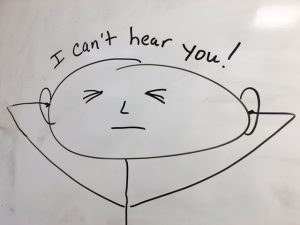 As adults, we might cover our ears with our hands at a loud blast or use headphones or earbuds to selectively curate the sounds we want to enter our eardrums, but sticking our fingers in our ears and yelling “I can’t hear you!” is usually frowned upon. I’m not proud to say that at a recent team meeting, I actually stuck my fingers in my ears and said, “I can’t hear you!” during a discussion. Of course I did this in jest, but it got me thinking about how easy it is to bat away ideas that I don’t want to hear.

Recently, a direct report came to me and told me about a discomfort staff was having with a particular approach senior management was using to support them during situations that needed escalation. As she spoke, I realized that she had told me this same thing two other times. I acknowledged to her that this was the third time she’d told me about this and that this time I would listen and do something.

So why did it take me three times to hear what she was saying? The first reason I couldn’t hear her was because the problem she was presenting was one that I really didn’t want to hear. I knew she and staff were right, but taking corrective action would be difficult to do not only in terms of process but also in terms of possible conflict it might cause. Easier to stick my fingers in my ears and pretend I didn’t hear. The second time she said this to me, the message landed but again I batted it away quickly. No good or new reasons – the same reasons really. The third time she told me about this issue, I was tempted to bat it away again. This time though, I paused and asked her to tell me more about what she had heard and observed. I let it sink in. Then I took my fingers out of my ears and asked her what she thought might help.

Fingers Out of Ears

While I know I don’t always hear feedback or input because I’m busy or simply think I’m right, this particular instance made me wonder how often I miss opportunities because I have my fingers in my ears. One leadership skill that is frequently taught in supervisory classes is about active listening. These lessons are often demonstrated through role-play situations where one participant listens to the other talk about something important to them and then relays back what they thought they heard. This is good practice and increases self-awareness around how often we stop listening and start forming our responses during a conversation. What this exercise usually lacks is the hard part – listening to a message that is difficult to hear because it involves feedback on our behavior, evaluative comments about a project, or suggestions for a different way to do something in which we’re heavily invested.

I’ve started to pay more attention to the point in a conversation when I stop listening to someone. If I can catch myself in the act, 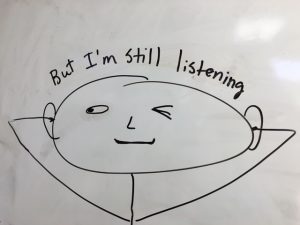 I can usually bring myself back to attention and start listening again. One clue that I’ve gone from active to passive listening is when I find myself forming my arguments against the idea while the person is still speaking.

Let the Speaker Know the Issue

Another practice I’ve been putting into place in these situations is to acknowledge to the speaker that I am resisting what they are saying. They often already know this. Even over the phone it’s easy to tell when someone is losing patience with our idea, is actively resisting it, or has stopped listening. If I acknowledge to myself and the speaker that I have my fingers in my ears but I’m still listening, we both know it’s a difficult topic that will need a little more processing by both of us before we come to a resolution. As teams move up the pyramid of Lencioni’s Five Dysfunctions from Commitment to Accountability, being able to acknowledge that one hasn’t fully processed an idea is crucial to achieving Results.

The other side of this equation that is key to the health of a team or relationship at work is respectful and professional persistence. There is a not-so-subtle difference between repeating a message that bears repeating and beating a dead horse (apologies to Dostoyevsky). Each of us has a responsibility either to acknowledge that an idea is not going to move forward or that its time has come. Both of these paths take courage and hard work.

How I can tell when I’ve stopped listening or am resisting an idea:

I literally want to put my fingers in my ears, hang up the phone, or walk out of the room to get away from them or what they are saying.

I start creating arguments against an idea while the person is still explaining.

I start glancing at my email or thinking about other things I need to do while the person is still speaking.

I am putting them and their ideas in a box.

What I do when that happens:

Change my posture – especially turn away from my computer if that is distracting me.

Start taking notes about what they are saying to force myself to pay attention to the content of their message.

Ask clarifying questions to open up rather than close down the discussion.

Admit that I am distracted or in disagreement so we can find a way forward.

Stop putting them in a box.

Leadership and Self-Deception: Getting out of the Box/The Arbinger Institute

This book was re-recommended to me recently by another bona fide coach. My old copy was dog-chewed but still readable. It is slightly distracting to have the main theme of the book around being in the box and out of the box so different from how we sometimes talk about being out of the box. How we put ourselves and others in boxes and how we carry those boxes around with us are enduring lessons to contemplate.

Five Dysfunctions of a Team: A Leadership Fable/Patrick Lencioni
This classic work is one I’ve turned to again and again as I’ve built and rebuilt teams. While the 5 dysfunctions label seems negative, using the positive attributes of the pyramid to understand what is happening with a team is priceless. I know a team is on its way to health when I stop pointing in frustration at the Lencioni pyramid that is a semi-permanent fixture on my office wall.